It's not often that happenings in Kuaotunu make the front page of the Mercury Bay Informer, but in January the mysterious appearance of a zebra crossing in the village did just that (you can read the article here).

The crossing and the temporary 30km signs that were subsequently installed by TCDC have had a significant impact slowing traffic down during what turned out to be a pretty hectic summer in the village, with unprecedented numbers using the reserve.

Your KRRA committee is optimistic that this has been a catalyst to more meaningful discussions with Council re long term solutions. We will keep you posted.

New Sculpture on the Kuaotunu Reserve 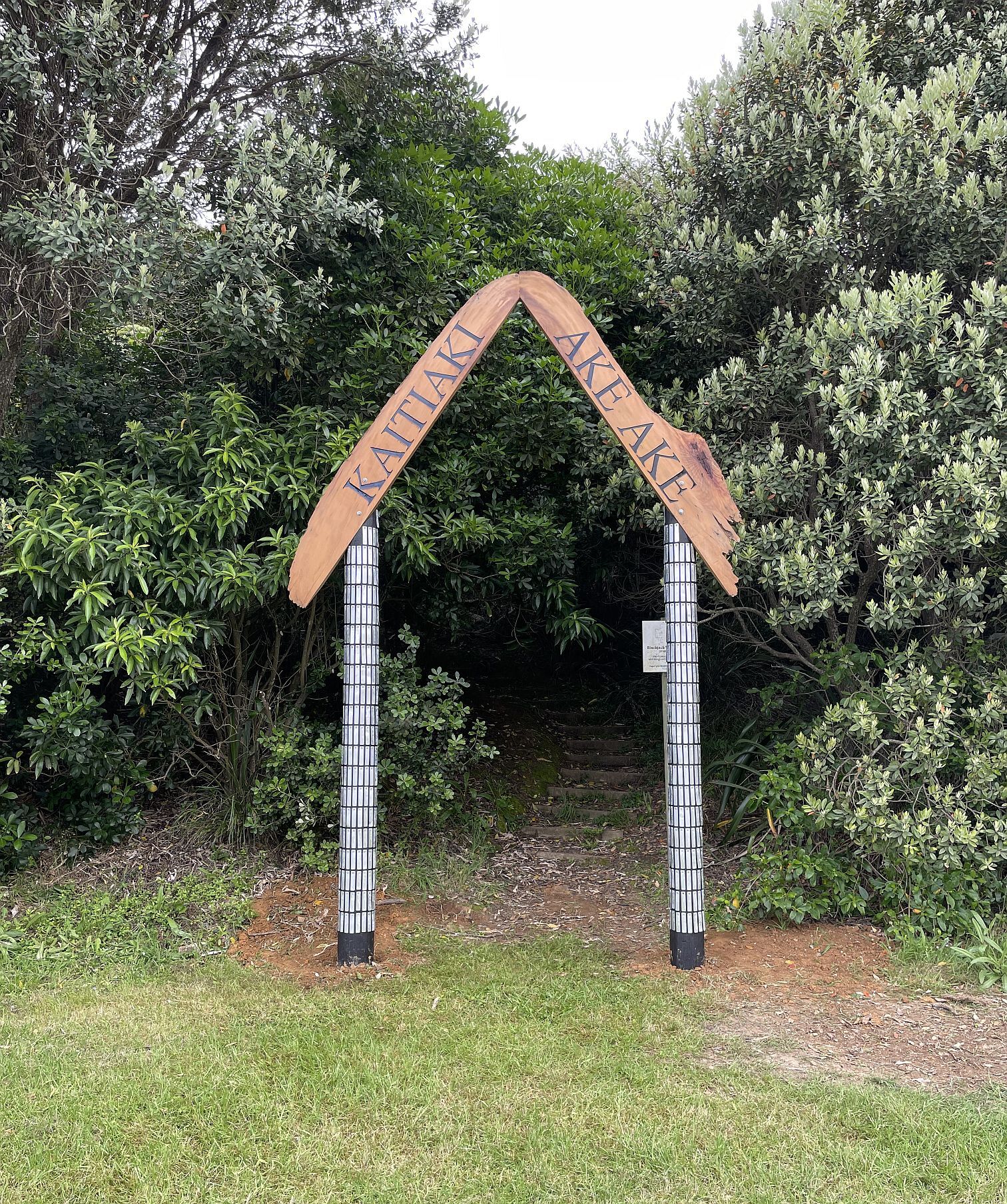 You may well be wondering about the new sculpture on the Kuaotunu Reserve at the entrance to the walking track.  This new structure is the creation of our Chris Charteris in collaboration with Kauri 2000 and represents a good story.

For the first years of planting Kauri 2000 offered purchasers of kauri seedlings the opportunity to have a tag with a personal message attached to the tree. This was an extremely popular idea and hundreds of people from all over NZ and overseas bought trees which Kauri 2000 planted with a metal tag bearing a personal message wired around the seedling.

A good idea, but…  the trees grew and the tags became a potential threat to the young kauri as the wires didn’t always expand with the tree. The tags had to be removed but this raised the question of what should be done with them and all the memories and generosity they represented?

Enter Chris and a conversation with Jill Kaeppeli, trustee of Kauri 2000. The end result is the stunning sculpture forming a waharoa over the track entrance complete with the hundreds of tag messages of goodwill attached to the poles.

The project is not quite complete with finishing touches still to be done. Because the sculpture signals the entrance to the track through to Ngati Hei land, it is intended to have a formal ceremony early this year to celebrate a beautiful sculpture and all the good wishes it holds.

Update on the Closure of Bluff Road 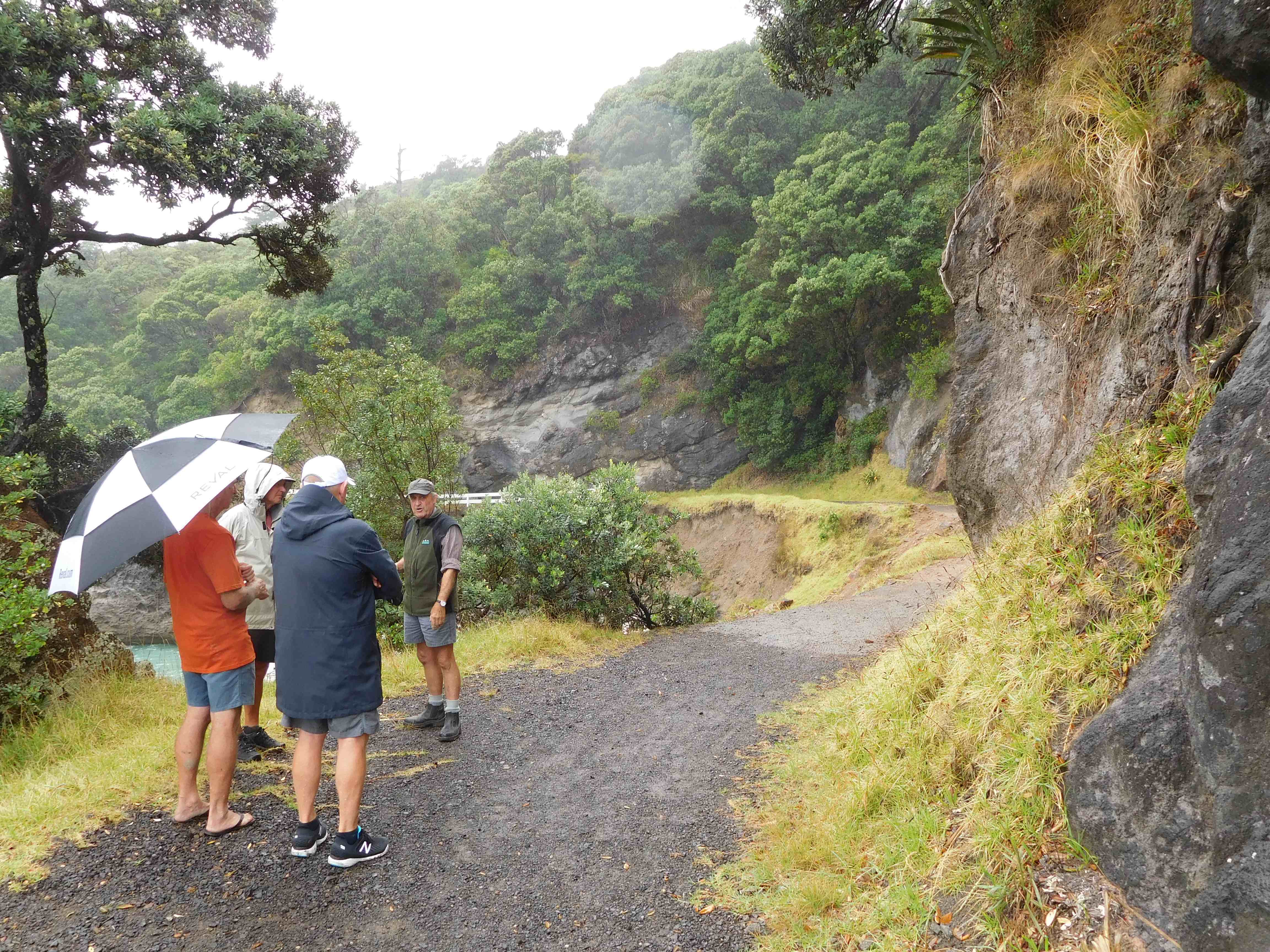 Brent Page and Alastair Brickell of KRRA met by the Bluff Rd slip recently with Mark Bedford and John Anson from the Matarangi Ratepayers Association Inc (MRAI) to ensure that our communities are working together on finding the optimum solution to this problem area. Kevin Crawford, one of our Kuaotunu members and a Technical Director with BECA, along with bridging expert John Gaukrodger of Bimihn Ltd, also attended and generously provided valuable input.

Both KRRA and MRAI strongly believe that the retention of this roading asset to enable people to cycle and walk between our two communities is essential, especially given the emphasis placed by both central government and TCDC on connecting communities in ways that promote healthy activities such as walking and cycling.  We are therefore advocating for a suspension bridge solution, rather than keeping the road permanently closed, which is one of the other options on the table.

We will keep you posted. Please note that we agree with the council that this part of the road is extremely dangerous for pedestrians and cyclists to use in its current state and therefore we ask everyone in our communities to respect the closure measures which have been put in place by the council.

Insights from a Project Kiwi Trustee

My name is Nick Gillingham and I have been involved with the Trust for 21 years, first as a kiwi chick survival monitoring contractor and then as a trustee.  I am still connected to the Kūaotunu Peninsula through Waitaia Bay and surrounds and get here as often as I can with my family and friends to enjoy this incredible place. As a trustee I have been asked to host this article and I would like to use this opportunity to give a bit of scientific background to the work of the Trust.

In 2001, I was contracted to continue a chick survival monitoring programme started by Lance Dew in 1997.  It was not pleasant work, but in the name of solid data and measuring success it was valuable. Young chicks were caught and radio-tagged in the nest and their movements and survival was recorded over the following months.

73 chicks (ten per year) were monitored over seven years (ending 2004) and this data was used as a tool to see how well the intensive stoat trapping set up worked. Of the 73 chicks monitored over seven years, 23 survived.  For context, in mainland areas where there is no predator control in place, around 90% of chicks are predated, primarily by stoats. Kiwi chick survival needs to be greater than 20% to halt population decline.

The survival monitoring of the 73 chicks provided accurate data and highlighted two things. Firstly, Project Kiwi’s trapping was a success, with an average of 31.4% of chicks surviving.  It sounds low, but the trapping had halted decline and was actually increasing the kiwi population in the Kūaotunu hills (something that has been difficult for many other projects around NZ to achieve).  During the study, there were some years when none of the 10 chicks survived.  During the best study year, 6 out of 10 kiwi chicks survived to the end of the monitoring period.

The second thing this data showed us was that Project Kiwi had room to improve. Through the study, it was understood exactly how well the trapping worked, and we asked ourselves: Is 31% survival enough? Can we do more? What more should we do?  It was agreed the trapping programme would be supplemented with Operation Nest Egg (ONE), particularly during big predation years or in areas on the fringe of the trapping set up where there were more predators and no traps.

To date, Project Kiwi has released 241 juvenile kiwi to the wider peninsula area at a weight that is safe from stoat predation through ONE.  These kiwi left the Kūaotunu hills as eggs, were incubated, hatched and reared in a predator-free environment and then returned.  These are extras on top of the wild-hatched chicks our trapping is saving.

Project Kiwi has always relied on good science to help guide its way and help us spend our precious, hard-found funds wisely.

There are and have been so many amazing volunteers and contractors who have helped Project Kiwi. We think we owe it to them (and of course those nocturnal, oblivious birds on the hill) to do our best. 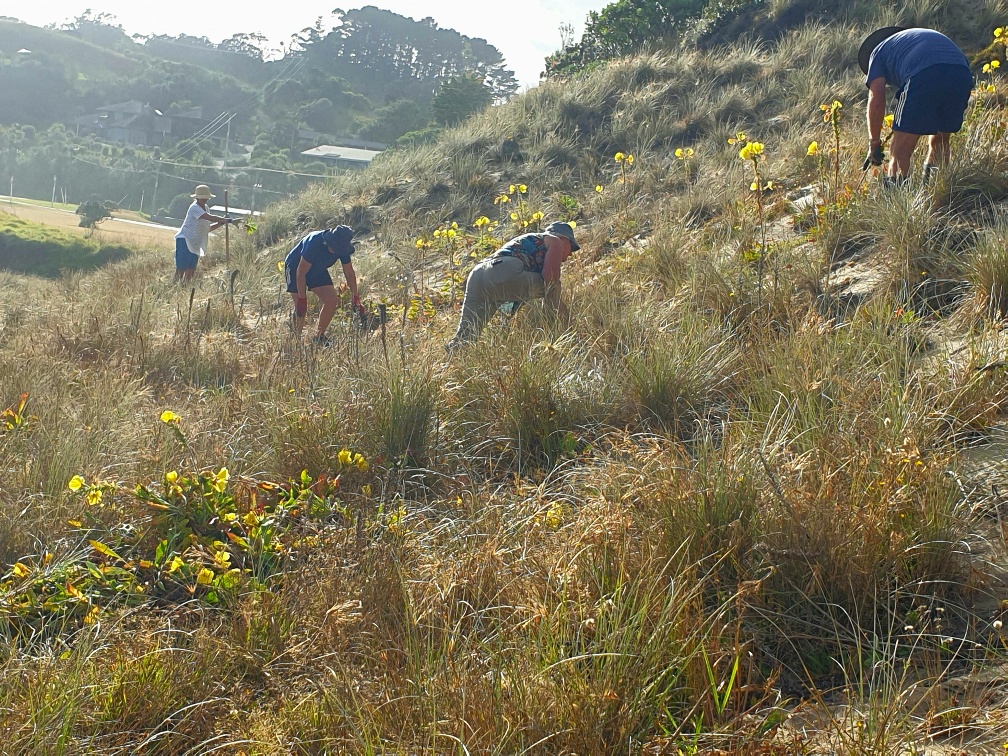 During 2021 the community-based Kuaotunu Dune Care group have had working bees monthly and on some weekends. It has been really encouraging to see bach owners joining the local volunteers on these weekend events. Work has been done on weeding dunes, and planting spinifex and pingao seedlings on Grays Beach, Black Jack Reserve and Big Rock Reserve “Ruihana Kawhero”. Pingao and spinifex seeds have recently been harvested successfully and sent to Whakatane for propagation and will be returned for local planting.

Our first volunteer working bee in 2022 will be on Wednesday 16th February, 8.30am on Grays Beach Reserve. Bring your spade and garden gloves.  You don’t need any experience or knowledge, we’ll show you everything you need to know and everyone is welcome.

In 2022 there is the opportunity for the Kuaotunu Dune Care Group to expand its activities and form an Incorporated Society.  A registered society will enable us to apply for funding from organisations such as Waikato Regional Council (WRC) and TCDC that have funds available for dune restoration. If you would like to join this Kuaotunu Dune Care Incorporated Society group you are very welcome.  Please contact  kuaotunudunecare@gmail.com for more information on our first meeting later this month.

KRRA AGM May Not Proceed at Easter

We were disappointed not to be able to hold our public meeting in early January as usual, due to the COVID-19 situation. Unfortunately with the country now having moved to the Red traffic light phase, it seems unlikely that we will be able to hold our AGM at Easter either, given that the hall can be used by groups of no more than 50 people in this setting, which means that we would not achieve our quorum.

We will confirm this by the end of March. It is likely we will need to follow the same process as last year, i.e. the online approving of our legal obligations such as the official annual reports. In the meantime please note that you do NOT need to pay your membership fees yet - we will advise you when this is required.

We do understand that our public meetings are popular forums for updates and discussion, and we depend on this input, so we encourage you to contact us at any time with any thoughts, ideas and concerns you may have.

Have You Received your Dark Skies Brochure Yet? 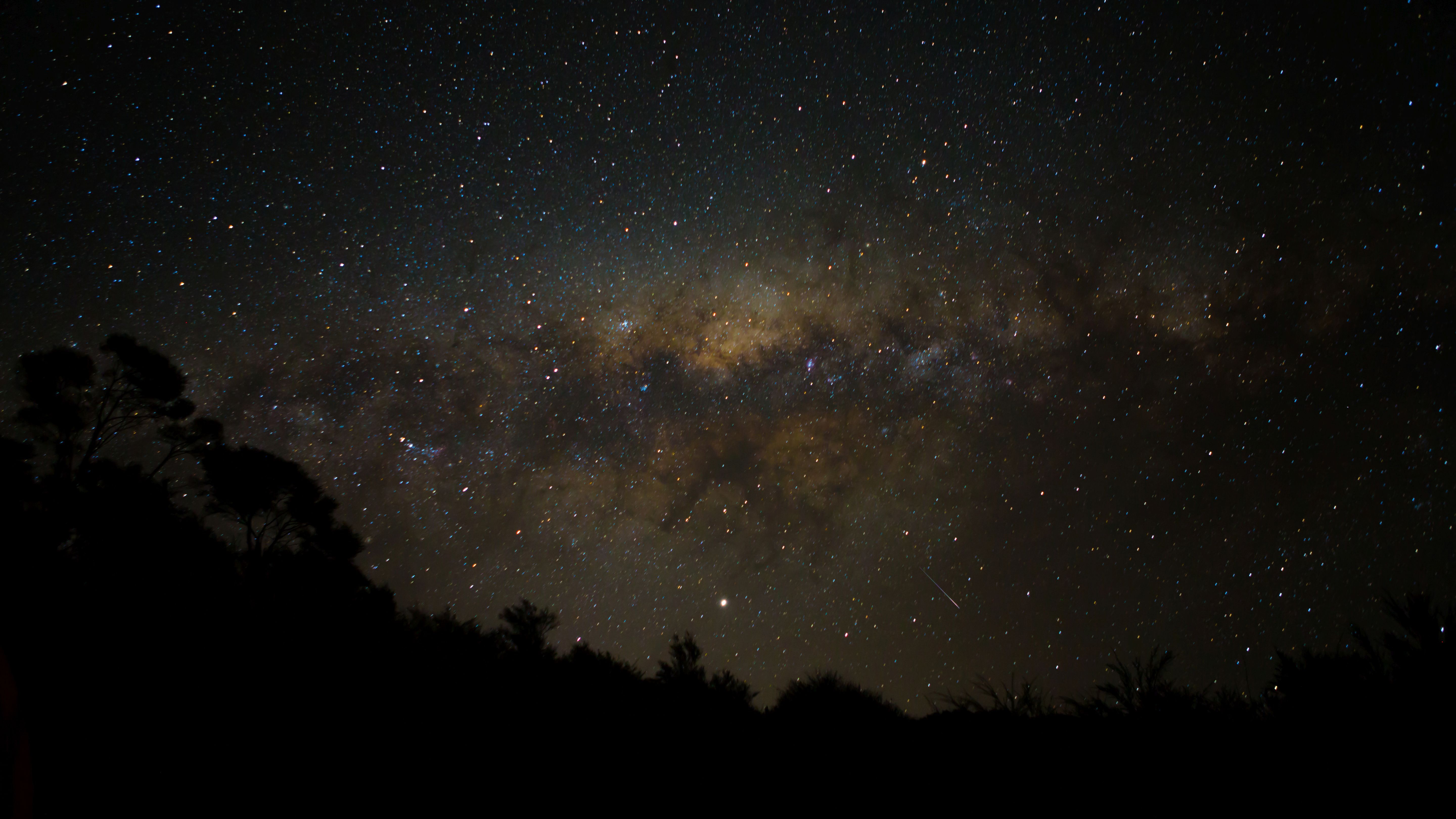 Check your mailbox!  The Dark Skies Group of the Kuaotunu, Otama and Opito Ratepayers Associations has produced a pamphlet with an introduction to the project and this was distributed to all residents and ratepayers over the Auckland Anniversary weekend.

Inside you will find examples of both good and bad exterior lights which are a major focus of the group and how you can help us control ‘light pollution’ to protect our precious night time environment.

Our dunes face a growing weed problem which threatens our native ecosystems. The dumping of garden waste and grass clippings over the dunes creates opportunities for weeds to move to new places and thrive there, smothering native coastal plants.

It is particularly disappointing to see regular fly tipping of grass clippings and garden waste over our dunes here in Kuaotunu.  Individuals who are caught can be fined by TCDC under the “Litter Act”.

Please make sure that all garden waste, including grass clippings, is composted or taken to the TCDC refuse tips.

This newsletter is brought to you by the Kuaotunu Residents and Ratepayers Association Inc (KRRA).

Please note that the views expressed in this newsletter are not necessarily those of KRRA.

Like to contribute an article to this newsletter? We welcome contributions about events, happenings, projects etc that are relevant to the Kuaotunu community. Please note that the Newsletter Editor has the final say regarding content and may edit content if required.

To find out more about the Kuaotunu Residents and Ratepayers Association, such as the date of the next meeting, how to join, agendas and minutes of previous meetings, etc, please click here. You are welcome to attend any committee meetings, these are usually held  every 6 weeks on a Thursday.