The Committee of the Residents and Ratepayers Association is delighted that so many members of the community took the time to attend the public meeting held at the beginning of February. 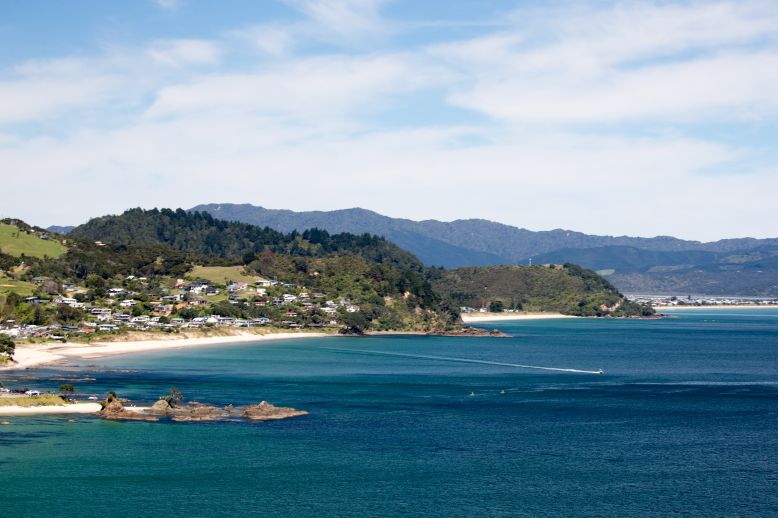 The purpose of the meeting was to talk about how we might make progress in addressing some of the suggestions and issues arising from the recent Community Plan refresh survey (if you haven't already read them you can see them here), and the input received was positive and constructive.

Some of you put up your hands to assist with various projects and we appreciate this.

As mentioned at that meeting, TCDC is also planning to update all Community Plans throughout 2019. So, Kuaotunu’s timing is great as we are already well down the track on this.

TCDC's stated intention at this stage is to amalgamate the existing plans for the Mercury Bay north communities (Whangapoua, Matarangi, Kuaotunu, Opito & Otama) into one plan only. Your Committee has expressed grave reservations about this, as even though there are some common themes, it is quite clear to us that Kuaotunu folk do not have the same aspirations as other communities.

TCDC started the consultation process with a recent workshop to which various representatives of the Mercury Bay north communities were invited (including two members of our Committee), but there will be more public community meetings and consultation. We will continue to advocate for Kuaotunu to have its own plan, and look forward to your thoughts and feedback.

In the meantime the Committee thinks it would be a good idea for the essence of our existing Community Plan (which was largely reinforced by the recent survey) to be made more visible on the Kuaotunu website, so that we (and organisations like TCDC, NZTA, DOC, WRC etc) don't lose sight of our community aspirations.

The desire to see more information on this website about the methods and options for predator control and environmental protection, together with what need there is in the community for volunteers at any one time, also came through strongly at the public meeting, and your Committee will be working on these suggestions over the next few months.

Finally the road verge between Pumpkin Flat and the village has been made safer for our kids to walk on after some mowing and pruning, with more mowing planned... highlighting the power of the community. Now all we need is some feet walking on it!

On the night of Wednesday 27th March a road roller owned by Broad Spectrum was taken illegally by a member of the public and used to destroy 13 Pohutukawa tress at the Kuaotunu Black Jack Reserve.

Its path of destruction ended when it crashed into a long standing beach shack on the neighbouring property. The machine was there to do road grading on the reserve on Thursday.

The damaged trees stood on Department of Conservation land which is managed by TCDC.  They were not able to be saved and the debris and stumps have now been removed.  The shack also sustained significant damage and had to be fully demolished the following week.

Nearby resident Callum Relph has taken full responsibility for the incident and has published the following apology to the residents and ratepayers of Kuaotunu:

To the Residents of Kuaotunu

I Callum was solely responsible for the destruction of the pohutakawa trees at Kuaotunu Reserve. No Kuaotunu residents were involved, and I apologise to those who have been caught up in my mess. Replacement trees have already been paid for and are waiting to be planted. I am sincerely sorry and apologize to everyone affected by my careless actions involving the needless destruction in your community.

I am doing my very best to right this wrong and can only inform you that this will never happen again.

It was with deep sadness that our community learnt of the passing of Paul Kelly, Chair of the Mercury Bay Community Board and until recently a resident of Matarangi.

Paul was a great champion of ground-up democracy and worked tirelessly to ensure that our communities were cohesive and accepting and that all voices were heard. He maintained a special, personal connection to Kuaotunu.

Our thoughts and condolences reach out to his wife Chris and all the family. We will ensure that his memory lives on by continuing to work hard and passionately for community empowerment.

AGM of the Residents & Ratepayers Association Coming Up

It's hard to believe that a year has rolled around so quickly, but Easter is almost here again already, and with it the Residents & Ratepayers AGM on Easter Sunday (21 April) at 3pm at the Kuaotunu Hall.

As an organisation which represents the members of its community, the Committee should ideally reflect the wide range of interest groups in the community. If you care about what happens in our community, please submit a nomination and make a difference! There are usually 12 committee meetings per year, and the expectation is that you should be able to attend the majority of meetings. Details of those people standing will be published closer to the time of the meeting.

Note that a revised constitution is again being submitted for adoption at this AGM. It is vitally important that the new constitution is approved, to prevent the Association losing its Non-Profit status (which would mean tax would be payable on all financial surpluses), so please take the time to read it before the meeting.

If you haven't yet renewed your membership for this year you can find the banking instructions here (note that it will also be possible to renew and/or join on the day of the AGM).

Renovations at the Kuaotunu Hall

Don't be alarmed if you see swarms of builders at the hall in April. The team from Paul Sayers Construction will hopefully be commencing the replacement of the corrugated iron cladding on the east and south walls with timber cladding to match the rest of the hall, as well as putting in a new window in the men's toilet and aligning this with the other windows on that side of the hall. 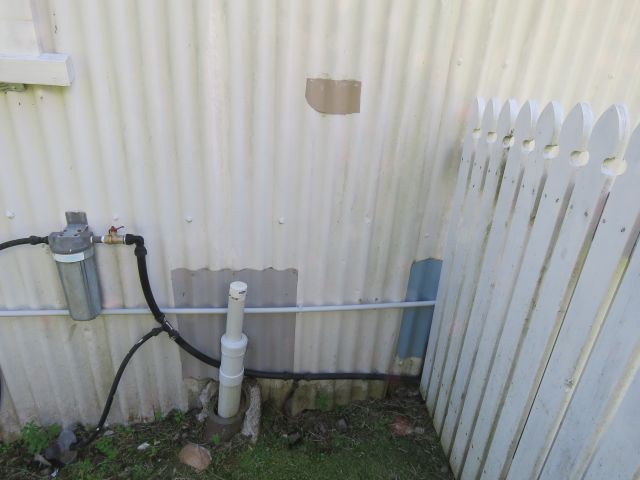 As you can see from the photo the existing cladding is in very poor shape, which has contributed to moisture and weather-tightness issues.

This is an expensive project and the Hall Committee would like to acknowledge the grants it has received from Trust Waikato, the Mercury Bay Community Board and the Lottery Community Facilities Fund, without which the project would not have been able to go ahead.

We would also like to acknowledge several generous donations received from Kuaotunu ratepayers. These have been immensely helpful, especially as building costs have risen substantially in the last year.

In addition to planning for this project, the Hall Committee has also recently simplified its fee structure and refreshed its website - you can check it out here. 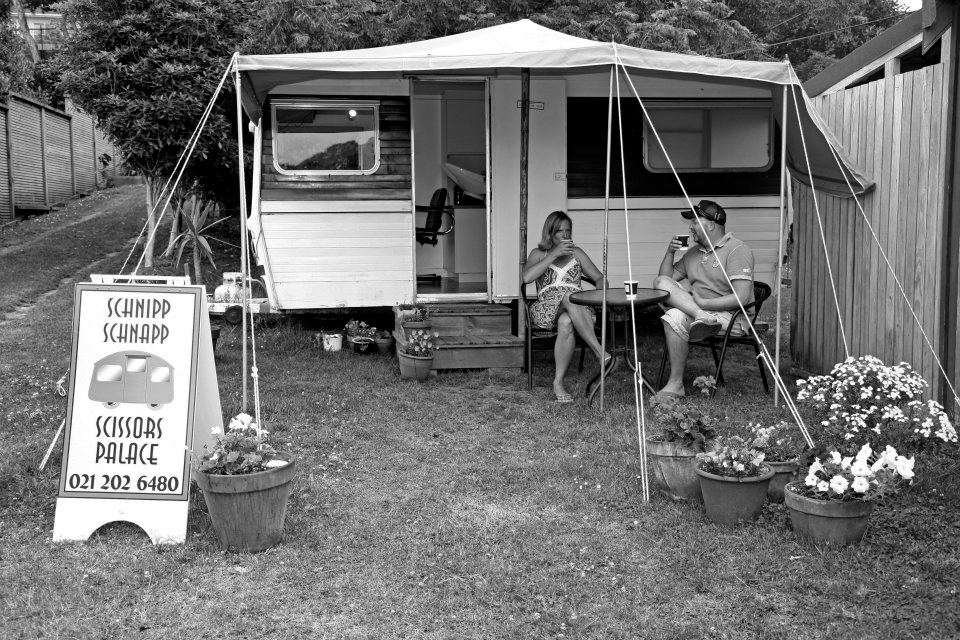 It's with great sadness that the community is preparing to farewell Schnipp Schnapp Scissors Palace from the heart of our village.

Nicole will be working at Schnipp Schnapp until the end of April, so get in quick in you want to enjoy one last haircut in this funky caravan!

While Nicole is returning to Europe for personal reasons, she will no doubt be a frequent visitor to Kuaotunu in the years to come where she holds a special place in the heart of so many people. Nicole, you will be sorely missed.

New Library a Hit in the Kuaotunu Community 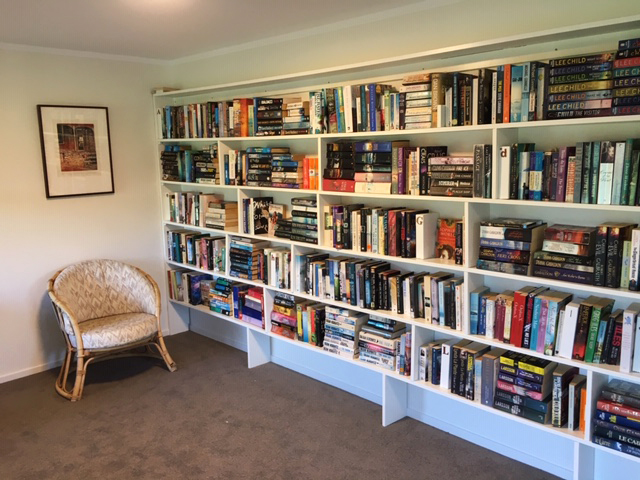 The Library Committee is delighted to report that over 120 families have joined the new Kuaotunu Library.

The library has a great range of fiction, non-fiction, children's books, magazines and DVD's - something for everyone.

If you're looking for some books to buy for your bach, call in over Easter when the Library Committee will be having a sale of those books which have been identified as surplus to requirements.

Update on the Half Pipe

The Skate Ramp Committee would like to gratefully acknowledge the many (some extremely generous) donations which have been made towards the Half Pipe project (i.e. the mini skateboard ramp). The project now has approximately $10,000 which is a fantastic start.

As mentioned in the last newsletter, it is intended to apply for grant funding for this project. The original application was declined due to a technicality. However further applications have been delayed due to the issue of the proposed location. It was originally envisaged that the Half Pipe would be located on the domain, close to the toilets and other sporting facilities such as the tennis courts, petanque court and playground.

However the process of getting approval from the parties involved (DOC, iwi and TCDC) is proving more time consuming than initially anticipated. The Skate Ramp Committee has been looking at alternative sites, but keeps coming back to the Domain as the preferred site. They are continuing to work on this and will keep the community posted.

To find out more about the Kuaotunu Residents and Ratepayers Association, such as the date of the next meeting, how to join, agendas and minutes of previous meetings, etc, please click here. You are welcome to attend any committee meetings, these are usually held on the third Thursday of the month.